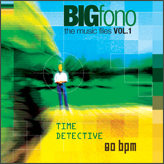 The music in the series has been compiled in a very special way, unusual for a regular television program. Based on the program's rough cut, composer Ties van der Linden has produced a number of basic tracks. With this material, director Kas van der Linden went to the editing studio and made a final version, based upon the music tracks. Before the final audio editing, called the 'mixage', everything went back to the composer, who finalized the mixing on level, quality and exact length. Basically this can be found on this CD. Finally, Ruud de Boer made a final television mix, consisting of the music and sync sound.